After DAVe Warnke, here is a second interview. I am still focusing on stickers and posters. I hope I would find time to interview more people in the future. First time I saw Adam Infanticide art was in Berkeley, a sticker saying “will you be my friend” without any signature. Then Eko told me the name of this artist. I became a big fan of his work. Some years later I fell really happy he accepted to answer this interview. Thanks to him. I hope you will enjoy it.

Can you introduce yourself? What is your nickname? If you are in a crew, which one?

This is a powerful name. What does it mean for you? Are you religious?

There actually isn’t any interesting story behind it. I’m not religious. I’m generally pretty anti-religion. I just wanted a “nom de plume” that probably hadn’t been used before that was provocative and kind of obnoxious like a punk rock name, like Johnny Rotten or whatever. Actually, a few years ago, I was having some mental issues and I actually thought it would be a good idea to have my name legally changed to Adam Infanticide. Luckily I was too lazy and incompetent to really go through with it.

I find this name really strong, although I have never seen it in the street. Was that a conscious decision or just a question of space on your sticker?

Instead of your nickname I saw that you signed with a little heart. Why such a contrast between the strength of the name and the sweetness of this logo?

I want the audience to feel that the sticker is friendly, that it means them well, even if the words are disturbing or whatever. It does become sort of signature, even though a lot of street art uses heart iconography. Actually not all of my messages get hearts, just most of them. There are a few where I don’t think it would work; it would contradict the words too much.

Your work is essentially text, not like taggers who graphically play with the letters. Your stickers have short sentences, full of meaning, almost mottos. How do they come to you? What is your writing process?

The quote-unquote “art” is less the stickers or the words themselves but in the reaction of the reader, what it makes them think. I want them to accessible and aesthetically generic, unadorned by any fancy stylistic flourishes. But since they’re hand-written there are a lot of organic imperfections to the lettering. The phrases themselves are just reactions to things I see and whatnot.

Do you keep them in a notebook?

I used to but now I just try and remember them.

Do you reuse them sometimes?

I reuse phrases all the time since the stickers are basically temporary in nature. A lot of them are sort of topical so if I decide one of my little slogans has become irrelevant, it gets retired, at least temporarily.

To make my question more precise, I would like to know if you have a ritual, if you follow certain rules.

There is definitely an obsessive/ compulsive aspect to making these fucking things. Making them has a meditative quality to me but I have to watch out or I’ll waste too much of my time on it. When it comes to putting them up, I’m fairly particular as to where they go. Like certain messages might have more relevance in one specific part of town but not another. A lot of them lose meaning outside of the US. Of course, when other people are putting up one of my stickers, I lose that control.

Sometimes I feel claustrophobic in the USA. The conformism and the superficial morality are heavy. Your messages leave a strong imprint in my mind; I read them as a breath of fresh air. How would you describe your style?

Well, we’re constantly bombarded by advertising and corporate propaganda whenever we leave our homes but there’s no forum for regular people to express themselves publicly. How can there be free speech if you have to rent a billboard or own a TV station or newspaper to say something? You can’t compete with mass media. There are barely any public spaces for people to go unless you’re going to buy something. Street art is a small but significant reaction to that.

Do you think you are insolent or anti conformist?

What do you think about t-shirts with messages?

A friend of mine (Damian Kalish) was doing that. Every day for like five years he’d write a message on a shirt with a sharpie and then wear that. Some of them dealt with, let’s say, uncomfortable political issues that really antagonized people especially when he wasn’t in our little metropolitan safe haven for progressives. I’m amazed he never got his ass beat by rednecks. We’ve actually had a few of my stickers printed on shirts but most of them work better as an anonymous message that you randomly come across on the street. By wearing a message, you are directly associating yourself with it and showing implicit approval for what it says.

Are there other street artists that you like? Do you have some names to drop?

There are tons of hella good street artists around here. Mildred is one of my current favorites. I’d suggest everybody visit the Triple 2 Seven Gallery on International in Oakland.

What do you think of stickers in the Bay Area? How would you describe the scene, what makes it different than other places?

It’s a pretty vibrant scene with a lot of unique work. There’s a pretty rich history of more “traditional” graffiti, the artsy-fartsy type shit that I do and everything in between. Unfortunately, in San Francisco, they spend more than anywhere on persecuting street art artists and buffing artwork despite a large portion of the community’s tolerance of street art. The graffiti abatement people are fanatical about maintaining control of the environment, which is what it’s all about, not eliminating so-called “urban blight”. Girafa recently got caught. Why are we wasting so much of our resources on this when there’s no money for schools? I find it insane that someone could be bothered by something put on a cement wall, but wouldn’t even notice an ugly wall that was “clean”. It has nothing to do with aesthetics and everything to do with a perceived encroachment upon social order. 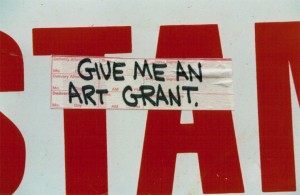 The sentences might be short; I still see them as a writing work. How does literature influence you?

I’m fairly well read. Even though they are just simple text, I view my work more as conceptual art than writing. They’re intrusive little interruptions to your daily life like outdoor advertising that will hopefully make the reader react somehow. I think I was originally influenced by people like Barbara Kruger and her provocative text-based art.

Are there other forms of art which feed your creativity?

I’m into a pretty wide variety of art. I usually like to participate in whatever project my friends are working on if I can. I’d rather have a lot of different things to play around with than to concentrate just on one art form.

Since how long have you been sticking? How did you evolve?

I’ve been doing this for years, since I was a kid. It’s really kind of pathetic. And it might sound weird, but my earliest messages were inspired by Yoko Ono and the “instruction pieces” she was doing with the Fluxus people. These were just text, just these absurd, often impossible, suggestions like “paint with your blood until you pass out or die”. Her book, Grapefruit is a collection of them. Basically, I stole that idea and it eventually evolved into less commands and more mundane little declarations and observations.

Also, I used to collect these bizarre photocopied fliers this insane guy in my town used to do. They were these anonymous, incoherent rants addressed to the community at large that more or less said stuff like, “repent your sins, you’re going to hell, et cetera”. They were long, meandering screeds that eventually got more and more pissed off and illegible. Some of my friends and I decided to get some stickers and fill them up with fucked-up stories so you’d be walking down the street and you’d come across this thing with a bunch of tiny writing on it.

Nowadays you can really see your impact on the internet; finding pictures of your stuff and people’s reactions. Do you feel like being a part of the popular culture?

It’s always cool to get a larger audience for your art but I don’t think seeing somebody’s photo documentation is really the same as encountering the words themselves on the street.

Do you see yourself still doing it in 5 or 10 years?

Do you make art on other mediums?

The stickers have never been my main thing. I don’t go out to specifically put them up. I just bring some when I go out. I’m not that prolific. I do some painting, occasionally some music. My art collective put on a few art and music shows a year, the Mishap prom and things like that. I try to be productive. Now I’ve got a job teaching art to little kids, which is pretty crazy.

Do you have one or two good stories to share? People’s reaction towards one of you sticker?

People will sometimes write responses. Or even do sticker responses. Someone wrote that a sticker was asinine and vulgar. At least it made them feel something. Once a girl (I’m assuming) wrote her phone number and a little note that said to call her or something. I didn’t, though. Sorry!

Something else to say? A message or people you want to speak about?

I think that’s about it.